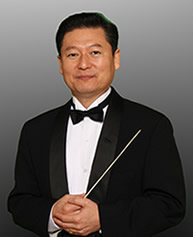 Young Keun Kim is currently the Director of Orchestras at Johns Creek High School in Johns Creek, Georgia. Prior to coming to Johns Creek, he taught at Camp Creek Middle School (1988-1992), Riverwood High School (1992-1997), and Centennial High School (1997-2009).  He is a graduate of Georgia State University where he received his Bachelor of Music degree (B.M.) and Master of Music Education degree (M.M.Ed.).

Under his direction, Young Kim’s groups have performed three times at the prestigious Midwest Clinic International Band and Orchestra Conference in Chicago – once with the Centennial High School Orchestra (2005) and twice with the Johns Creek High School Orchestra (2012, 2017).  This year, he will take his orchestra once again to the Midwest Clinic in Chicago for the fourth time.  Soloists with his orchestras that have performed at the Midwest Clinic include Chris Martin (Principal Trumpet, New York Philharmonic) and William Pu (Former Associate Concertmaster, Atlanta Symphony Orchestra).

Young Kim is an active clinician, guest conductor, and adjudicator throughout the United States and abroad.  He was a member of the prestigious Georgia Governor’s Honors Program (GHP) faculty for four summers (1998, 1999, 2000, and 2003). In addition to guest conducting All-State and Honor Orchestras, he has also conducted many summer music camps such as the American String Teachers Association (ASTA) music camp, the University of Georgia Summer Music Camp in Athens, Georgia, and the Interlochen Summer Music Arts Camp in Interlochen, MI.

Young Kim has also been active in the Korean-American community in the Atlanta Area. He founded the Korean-American Youth Center Orchestra/KAYCO (청소년 센타 오케스트라) in 1994 and conducted this orchestra for four years. Members of KAYCO included some of the top middle, high school, and college student musicians in the Atlanta area. This group was invited to perform at various important functions, including the 1996 Atlanta Summer Olympic Games at Woodruff Park. Young Kim has also directed the Korean-American Chamber Orchestra. Members of this group included the concertmaster and principal string players of the Atlanta Symphony Youth Orchestra (ASYO) and college students of Georgia State University.

In 2006, Young Kim was selected as the “2006 Georgia Music Educator of the Year” by the Georgia Music Educators Association. He is listed in the 1998, 1999, 2003, 2005, 2006 editions of the “Who’s Who Among America ‘s Teachers.”  He was also selected and recognized as the “Expert Teacher Cadre-7” in the Fulton County Schools system in 1997 and participated in its leadership program.

In addition to being the Director of Orchestras at Johns Creek High School, he also teaches piano class and has taught AP Music Theory.

It is also very important that we know how to properly assess ourselves and situations. It is a human nature that we hear, see, smell, taste, and feel/touch WHAT WE WANT TO hear, see, smell, taste, and feel/touch, since those all involve five basic human senses. That is why it is so important for us to have an honest, wise friend, mentor, coach, or a teacher that can see from a different perspective to help lead us into right direction. They will help us to discover the ‘truth.’  We all need help from others. We must remember to thank and appreciate them for their efforts, always”